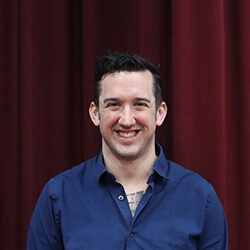 Dan Roberts brings a diverse background in social circus, arts education, youth advocacy and non-profit leadership to CircEsteem. He began his career in social circus in Chicago, serving as the associate director of CircEsteem from 2004-2007.  He went on to work as an artist-in-residence and instructor at Circus Smirkus in Vermont. In 2008, after moving to Indonesia, Dan founded the Red Nose Foundation, an Indonesian organization that champions the rights of children in education and child protection through after-school arts, athletics, and educational programming. He served as its Executive Director for for 8 years.

Dan is the very proud father of two amazing clowns (children).  He holds a BFA in Acting from Roosevelt University’s Chicago College of Performing Arts and is also a founding member of the Asian Social Circus Association, an association that connects social circuses from Kabul to Canberra.

Back To All People