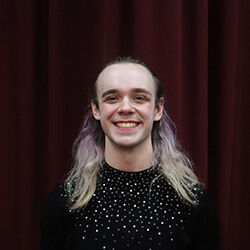 Ian R. Q. Slater (they/he) is a Chicago-based performer and educator, and holds a B.F.A in Acting from the Chicago College of Performing Arts. They began juggling in 2017 after taking a circus class at CCPA, and shortly thereafter began volunteering at CircEsteem, where they quickly became a compassionate and committed coach. Ian has now served as a coach for the last three years, and just last year pioneered the role of Operations Coordinator here at CircEsteem! Ian remains greatly involved in the Chicago theatre community, and is a firm believer in exposing oneself to the things that scare you. “In challenging myself to persevere through frustration and fear, I’ve learned more and more the importance of finding comfort in discomfort. It is this kind of vulnerability — perseverance through fear — that leads to the most compassionate and human art that exists.” And why not have a little fun juggling along the way?

Back To All People